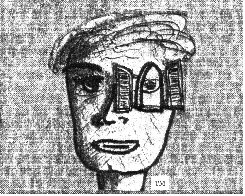 The Eye is Open

During Lent (of 2016) I decided to rename this blog “Truth vs Reality.”

I actually drew the above picture and am really glad I scanned it in one day because the original is lost. The subtitle of the Spiritual Advocate column was “The Eye is Open”. Catchy, right?

At the time, I did not make the connection to the Holy Spirit, aka the Paraclete or the Advocate. But, it was intended to be something of a tongue in cheek religious advice column that would secretly have something useful to say.

I have now given up the fake advice business and turned the idea of the Spiritual Advocate into this blog of things that spring to mind rather episodically. BUT, I realized that I was retaining the name Spiritual Advocate for sentimental reasons, when in fact the blog had really gone off on a direction seemingly of its own choosing, but which has something to do with Truth and Reality.

I am an adherent to the correspondence theory of truth. Simply put this theory holds that the test of truth is reality.

Or put another way, truth is descriptive of reality. And yes that means that Frater Bovious is a moderate realist.

Another way to think about this, and reason I titled this Truth vs Reality, is because of the interplay between Being and Reality. First off, as a moderate realist, I hold that there is extra-mental reality that is there whether I am aware of it or not, and that it is outside of my head, and not me. “Being is reality considered in itself, and truth is reality considered in its relation to an intellect which grasps it.” (Feser, Scholastic Metaphysics, p. 139)

There are people that disagree with this theory. In general I find them incoherent or dishonest, aka metaphysical idealists. But, because the ideas of metaphysical idealists permit people to lie to themselves such that they can do whatever they want, it is becoming the predominant world view. A very incoherent and sloppy-thought world view, and in my mind the root of all evil.

Frater Bovious is not my real name. Fooled you didn’t I. It is a play on words, Bovious, Obvious, Bovine – and has to do with The Hermetic Order Of The Ruminantia (THOOTR) about which nothing more may be said unless you are of the Herd. I also did not make the connection to Aquinas the “Dumb Ox”, so-called. Well, actually no one did, so never mind.

This is a Catholic Blog, in that it is written by a Catholic with the intent of being a faithful series of ruminations on things God and Church aka Truth and Reality. It is not however in any way endorsed or approved by the Holy See or the local ordinary, no doubt simply because they haven’t run across it yet. So, where the opinions here match up with the will of God and the Teachings of the Catholic Church, all the glory to God, and where they fail to do so, mea culpa.

Lastly I became interested in becoming a Lay Dominican in June of 2015 and became temporarily professed October 29th, 2017

(Why so formal with the Mr. and all? So that people don’t confuse my OP with me being a priest.)

Let me know what you thought of this post! Cancel reply

This site uses Akismet to reduce spam. Learn how your comment data is processed.